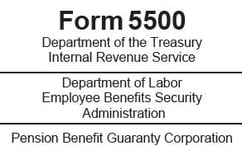 Hopefully, the revisions will streamline the financial information in the return.  More details will be provided once the comment period has closed.  We are hopeful that this means no changes to Form 5500 at all before 2019.

The 2015 Inflation Adjustment Act requires federal agencies to adjust their civil monetary penalties.  DOL has announced adjustments that go into effect for penalties it assesses after August 1, 2016 for violations occurring after November 2, 2015.   Beginning in 2017, the penalties will be adjusted annually for inflation.  Violations include, among other things, failure to provide blackout notices and automatic enrollment notices, failure to provide benefit statements to certain former participants and beneficiaries and failure to file Form 5500.  Some of the adjustments are significant.  The penalty for failing to file Form 5500, for example, increases from $1,100 per day to $2,063 per day.

Note that the Revenue Procedure does NOT substantially change the 6-year remedial amendment cycle for the pre-approved plans (prototypes, volume submitter) that are frequently used for 401(k) and other plans.  The most recent restatement cycle ended April 30, 2016 and the next cycle is still anticipated to end in 2022.  During this cycle, ESOPs will be permitted in the pre-approved plan program after the IRS approves plan documents for ESOP use.