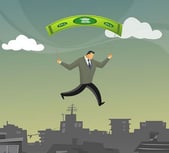 Provisions in the Setting Every Community Up for Retirement Enhancement Act of 2019 (the “SECURE Act”) require defined contribution plans to include illustrations of estimated lifetime income stream of payments. The idea is to provide information to participants that if the account balance were converted to annuity payments how much income would be payable to the participant (based on various assumptions) in both the form of payments over the participant’s lifetime and payments over the joint lifetimes of the participant and survivor. The Department of Labor (DOL) published an Interim Final Rule (IFR) on September 18, 2020 that becomes effective September 18, 2021. On July 26, 2021 the DOL issued the Temporary Implementing Frequently Asked Questions (TIFAQ) to clarify some of the provisions in the IFR that, frankly, were a little confusing.

Under the IFR, lifetime income illustrations are provided as part of the participant’s benefit statements and include an explanation of the assumptions used to generate the illustration and other disclosures. The key assumptions and disclosures are:

For plans that don’t permit participant investment direction (and thus aren’t required to issue quarterly statements), the illustrations must be on the statement for the first plan year ending after September 19, 2021. For calendar year plans this will be the statement for calendar year 2021 (which would be furnished no later than October 15, 2022 - the extended deadline for filing the 2021 Form 5500).

To address fiduciary liability concerns, the interim rule also includes relief provisions so long as the   illustrations are drafted using model disclosure language contained or language that is substantially similar.

Many 401(k) plan recordkeeping platforms already have a feature that will show an estimated monthly income amount that could be generated based on the 401(k) account balance and the underlying assumptions used to generate the illustration. The IFR allow plans to continue to show illustrations using different underlying assumptions but also must add illustrations that comply with the assumptions and provisions contained in the IFR and other applicable guidance. This will be new territory for most ESOPs as balances have, in our experience, never been translated into a monthly stream of income illustration. While it may create some confusion at first we’re optimistic participants will adapt quickly.

And finally, as noted above the interim regulations were issued on August 18, 2020. That was followed by a comment period ending November 17, 2020.   In the IFR the DOL stated that it intends to issue a final rule in advance of the September 18, 2021 effective date. During the public comment period the DOL received a number of comments asking if the final rule will provide some transition relief if the final rule is not issued significantly in advance of September 18, 2021 (which, given this is being written in early August, 2021, begs the question of how does one define “significantly in advance of September 18, 2021). In the TIFAQ, the DOL stated “We appreciate the commenters’ concerns about the burdens and challenges that could arise if the Department issues a final rule that differs materially from the IFR without sufficient transition time for plan administrators to accommodate any changes from the IFR.” Looks like we’ll have to wait and see what happens.